Why you should visit Cuba?

From strolling through cobbled streets to diving into Havana’s bustling nightlife, there is so much to see and do in Cuba that one trip is just not enough. Thanks to its tangled history, the archipelago offers an unconventional touristic experience with a generous helping of vivid landscapes. Here are a few reasons to make the trip.

Cuba’s tropical climate and year-round warm weather mean that you can visit the islands any time of the year. Temperatures stay above 21°C even in Winter, averaging a surprising 26°C in February, while the late summer months have a balance of sizzling heat and cooling showers.

July and August might be called Cuba’s ‘wet season,’ but you’ll find that the rainfall is infrequent and leaves the streets with a fresh earthy scent. You will still need to bring sunscreen if you travel then as on most days, you won’t encounter any clouds or rain.

Some of Cuba’s best natural resources are its azure waters and sandy beaches. Varadero beach is easily the most popular one, thanks to its white sands and lively cultural setting. Day trips from Havana to the town of Varadero are common, as the beach and water sports services there are well worth the two-hour drive.

If you want to escape from the crowds, there are many quiet and beautiful beach resorts in Cuba to explore, Jibacoa beach is a tranquil stretch nestled on Cuba’s northern shore, between Varadero and Havana. This idyllic stretch offers serenity, with nothing but sand and ocean as far as the eye can see. If you like to dive and snorkel, Playa Jibacoa is a perfect spot to discover the underwater world – with two sunken shipwrecks to explore.

The paradise island of Cayo Santa Maria is situated off the north coast of Cuba within a UNESCO-protected archipelago, this dreamy isle boasts beautiful white powdery sands that stretch for 8 miles. If you are a snorkelling fan, discover Buenavista Biosphere Reserve, home to the second largest barrier reef in the world where you can spot 6,500 underwater species!

Cayo Coco is a small tropical island located on Jardines del Rey, off the north central coast of Cuba, is an ideal spot for nature lovers. Cayo Coco is best known for its white-sand beaches, coral reefs, azure lagoons, tropical mangroves and for playing host to one of the largest native colonies of pink flamingos in the Americas! Grab your snorkel gear and discover the marine life, get active with water sports, or simply lay back and soak up the beating Caribbean sun.

Even though Socialism is a big part of Cuba’s culture, you won’t find a hint of soviet brutalism in its architecture. If you stroll through Havana or Camagüey’s maze-like streets or Trinidad’s squares, you will find yourself in a living museum of 18th century Neoclassicism, Cienfuegos is a beautiful coastal town hailed for its rich heritage and beautiful landscape, It's surrounded by the Sierra del Escambray Mountains it boasts colonial-era boulevards and it's the only French colonial city in Cuba, Santa Clara is a must visit for those who are really interested in Cuba’s history, it full of colonial and revolutionary history, this is where the last battle of the revolution was fought, and the city is full of landmarks to the revolution including the Che Guevara mausoleum.

Havana is Cuba’s Iconic Capital, it’s instantly recognizable it’s a city unlike any other steeped in History and culture, to some the city is trapped in a time warp, with its streets full of Classic American cars like Buicks, Cadillacs and Chevrolets lining streets filled with Colonial style buildings dating back to the 16th Century, to others it’s the gateway to the Latin world. Havana is one of the last places on earth that you can describe as being unique, it offers visitors a glimpse in to a bygone world, it’s Old town is a UNESCO world heritage site.

Many of the colorful buildings in towns like Santiago de Cuba, Cienfuegos and Trinidad have been built during colonial times by European settlers. Thanks to the well-preserved cobblestone streets, squares, and Cathedrals, many of Cuba’s colonial towns attract history enthusiasts from every corner of the planet.

Nine of Cuba’s colonial centres and natural parks have been included in UNESCO’s list of World Heritage Sites, here are some notable examples:

Old Havana and its Fortification system built in the 16th century. The old centre of the capital used to be the most important port in the Spanish West Indies, so its architectural character is a fusion of baroque and neoclassical monuments.

Desembarco del Granma National Park, known for its limestone terraces and karstic landforms. The reserve is your go-to place if you are looking to find some lush seascapes.

Vinales is a beautiful area in the Pinar Del Rio province, the small agricultural town of Vinales offers tourists the chance to explore the UNESCO-listed Vinales Valley and Sierra de los Organos Mountains. It is a quaint little town popular for its tobacco plantations and world-famous Cuban cigars. The town’s street is lined with beautiful colonial-era wooden houses. This little city attracts artist’s, photographers, rock climbers, hikers and those simply looking for fresh air and solitude. Vinales Valley offers a host of natural marvels, this relaxed and traditional settlement refuses to modernise with time, Horses and Ploughes are still used in agriculture here. What tourists experience here is, a small agricultural town, friendly people and seclusion from the modern world, Vinales is also home to the Casa de Caridad Botantical gardens and steep lime stone hills that are over 160 Million years old known locally as Mogotes.

Trinidad is beautiful part of Cuba that has UNESCO world heritage status, it’s an almost perfectly preserved colonial settlement, its colorful buildings and palaces were once home to rich plantation owners, its people love to dance, music can be found everywhere! Trinidad is a great place for those that want to experience more of Cuba, it also offers stunning white sandy beaches at Playa ancon which is only about 12 kilometers from the city.

Camaguey is Cuba’s third-largest city, the architecture overwhelms the city's maze like streets, It is also one of the major strongholds of the Catholic Church on the island. Locals are called "agramontinos" by other Cubans and are respected for their resiliennce. Camaguey's rich colonial past and packed intricate streets are awe-inspiring Camaguey’s historic centre was listed into UNESCO World Heritage Status.

Cienfuegos is a beautiful coastal town rich in Heritage. It is very popular amongst tourists. Surrounded by the Sierra del Escambray Mountains and with colonial-era boulevards that run parallel to the Jugua Bay, Cienfuegos is the only French colonial city in Cuba.

Another site on UNESCO’s list is the Castillo De San Pedro de la Roca, this is a 17th centrury fortress located in Cuba’s second largest city Santiago De Cuba, it’s one of the best preserved examples of spanish-American Military archictecture in the world

Even hiking in Cuba is inevitably entwined with the archipelago’s history. You can trace the journey of Fidel Castro and Che Guevara’s guerilla warfare by exploring the trails of Sierra Maestra. Apart from being home to the Cuban revolution, the mountain range is best known for its highest peak – Pico Turquino (1974m).

Cuba’s tropical rainforests offer opportunities for a different type of trekking. You can reach the marvelous San Claudio waterfalls after walking a 13km trail through Las Terrazas – an eco-village in one of UNESCO’s biosphere reserves, La Sierra del Rosario.

Vinales Valley situated in the Pinar del Rio Province is surrounded by The Sierra De Los Organos mountain range offers visitors the chance to take in Dramatic sceneary with limestone formations created over 160 million years ago known as Mogotes, popular with rockclimbers,hikers,artists and photographers it’s easy to see why this is a UNESCO world heritage site.

With over 20 endemic bird species, Cuba is a true hotspot for birdwatching. The Bee Hummingbird is native to the archipelago and weighs a mere 2g. Even if you don’t spot one, you are bound to come across a Cuban trogon or a quetzal with iridescent plumage.

The lack of pollution and the firm environmental protections in Cuba offer unmatched scuba-diving opportunities. You can visit La Cueva Azul (Blue Cave in Spanish) in the Punta Francés National Park to swim among schools of silver Tarpon. You might even sight the protected Hawksbill turtle if you go diving between May and October, if your brave enough you can also try shark diving in Camaguey. 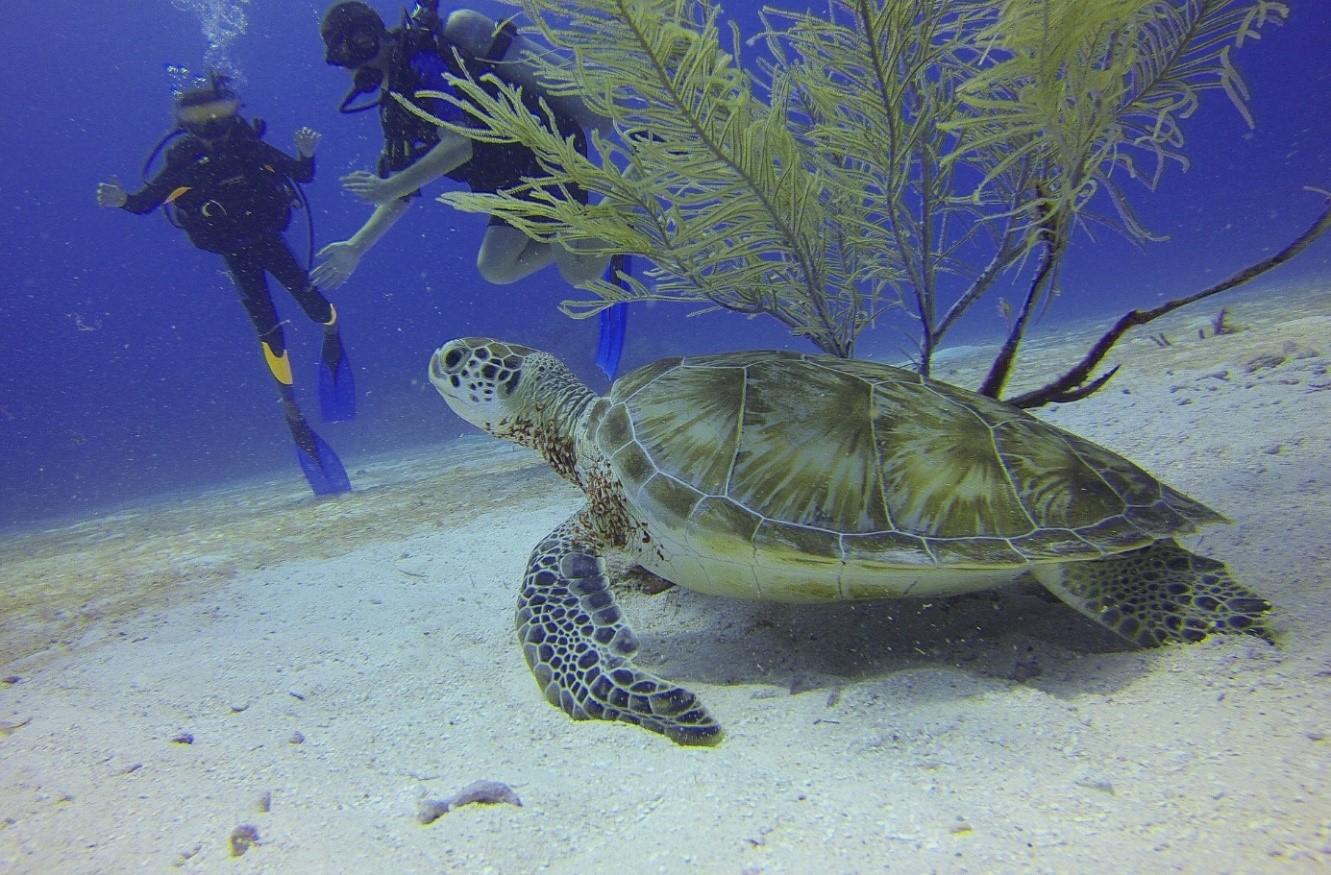 8. Learn to dance in Havana’s clubs

A holiday in Cuba is incomplete without a visit to its famous Salsa Clubs. Bigger cities like Havana and Trinidad are filled to the brim with live music venues where you can learn from and practice with professional salsa performers. You can find bars and clubs even on Cuba’s smaller isles. La Cueva Del Jabali is a cave rave with live music and fire dancers in an otherwise tranquil island named Cayo Coco.

As a country with a colonial past and a not-so-distant revolution, Cuba boasts a wealth of museums. You can visit the Museum of the Revolution or the imposing El Capitol building in Havana or go for a drink in El Floridita, the favourite bar of Ernest Hemingway, take in the ballet at the Theatre of Havana where the world famous Cuban National ballet company is based, or visit the Teatro Thomas Terry performing arts theatre in Cienfuegos built in 1887. If you want to immerse yourself in authentic Cuban art, you should visit the studio workshop of feminist artist Martha Jiménez in Camaguey.

The Cuban people are famous for their hospitality, when you visit Cuba you should deffinetly try out some of their famous Paladares, these are local family run resturants that give you the chance to sample local cuisine in authentic surroundings.

For a truly emersive experience why not spend a night or two in one of its many Casa Particulares. These private homestays allow you to live with a Cuban family for a few days and meet the local community, you’ll probably have some new friends and a ton of good memories by the time your holiday is over, ask one of our specialists for more information.

The nature, history, and culture of Cuba have been attracting millions ever since it opened its borders for tourists. Thanks to low crime rates and friendly people, the country is known as a safe travel destination, so visitors can kick back and enjoy their journey.